I’ve had this example in mind for a while now and seeing something similar in the wild, made me want to write this article down.

So, in this article you’ll learn how to create an interactive menu using CSS3 goodness and jQuery’s power.

The idea behind this example was to have some nicely arranged blocks and once you click on one of them, the block will start showing its hidden content starting at its current position.

Besides being a menu, this example can also serve as a perfect single page website. For example, just think that a block can be named “Contact” and could contain a nice contact form.

Nothing too complicated here, each block has a title that is hidden once its adjacent content will be triggered. Regarding tabindex will discuss a little later.

In the following rows I’ll try to explain a bit the styles that were used to create this example.

First of all we’re going to add some basic styles for our list wrapper including clearing floats. Also, you may have noticed the counter-reset: li; declaration, you’ve seen it before and we’ll use it further again to create a nice counter effect.

Below you can find the CSS rules used in order to add some basic styles for list elements.

Clean li’s margins and colorize them

Above we’re using margin: 10px 0 0 10px; to add spacing between elements, now we have to clean some of them. Also we’ll colorize the li elements along with its content window and close button.

In this case, to colorize .content and .close for each li, it would have been great to just use background: inherit; declaration. But, due browser inconsistency we’re going to use the “hard” way, as you can see below: 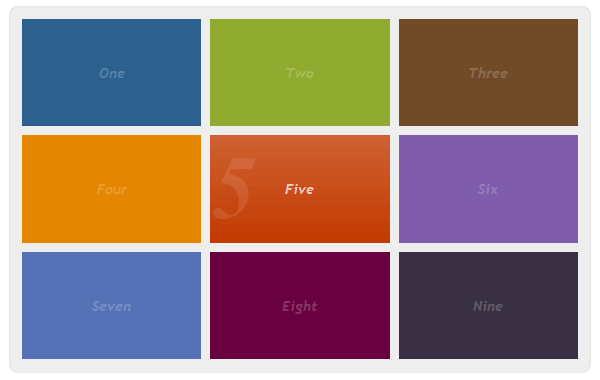 In this screenshot, you can see the fifth block hovered.

Below you have the jQuery code, I think it’s quite easy to follow and understand: 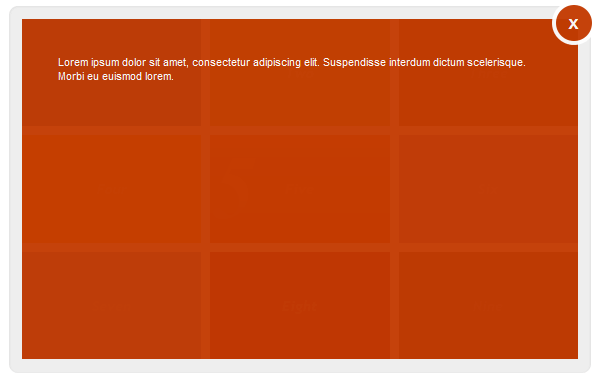 Regarding opacity, due its lack of support for older browsers, you’ll need to use the display toggleing for IE Trident:

Other existing CSS3 stuff like transitions and gradients and just play nice where the support allows it.

As you already noticed, we’ve used some CSS3 selectors that older browsers like IE8 and below do not support.

So, we need a solution that fixes the example for those browsers. In my opinion, the best solution in this case is to use the Selectivizr tool, as we’ve already included jQuery in our project. That’s because Selectivzr requires one of those JavaScript libraries: jQuery, MooTools, Prototype etc. in order to work.

The cool part is that along with HTML5, the tabindex attribute can be used on any HTML element. We’ll be using that in our example to enable tabbing navigation: <li tabindex="1">.

I really wanted this example to be accessible via keyboard and I made it. When tabbing, you have the possibility to trigger a window by pressing the ENTER key and then close it by pressing the ESC key:

I hope you liked this article and I’m looking forward to read your thoughts about it. Thanks for reading!