With that in mind, I thought about a Venn diagram that does the job perfectly when it comes to represent and visualize the intersection between these two sets of HTML replaced and void elements. 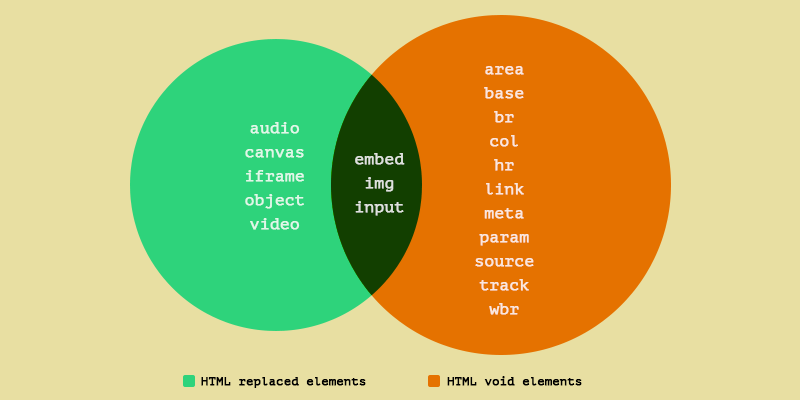 According to W3C, an HTML replaced element is an element whose content is outside the scope of the CSS formatting model. An example is the HTML img element, whose content is replaced by the image that its src attribute designates.

Oh, and the img element is one of the HTML void elements too. 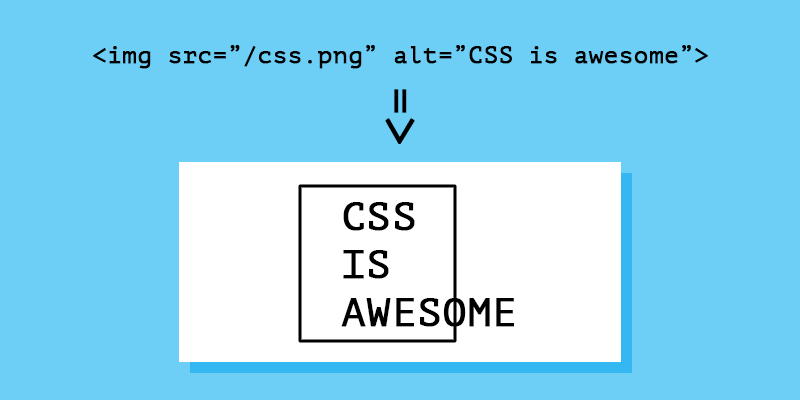 Here’s the list of HTML elements that can be replaced elements, according to the WHATWG:

Objects inserted using the CSS content property are anonymous replaced elements. They are “anonymous” because they don’t exist in the HTML markup.

I did stumble upon this while writing on how to get the current DOM node in browser’s console but didn’t actually know they are called anonymous replaced elements. So, you can run $0 on CSS pseudo-elements in the DOM, because the ::before and ::after pseudo-elements are displayed in browsers’ elements tree.

CSS properties that apply only to HTML replaced elements

The object-fit and object-position are two CSS properties that apply only to the HTML replaced elements:

The default size for some of the HTML replaced elements, like iframe or object, is 300 pixels wide and 150 pixels tall.

When the img is not a replaced element

Therefore, it is possible to use CSS pseudo-elements in order to style the img element when its source image has failed to load. Here’s an article on how to style broken images, by Ire Aderinokun.

Within the WHATWG table of contents, the form controls are listed under the non-replaced elements. The main reason the input element can be considered a replaced element is due to the fact that inputs with image type attributes are replaced elements similar to img.

This means that using ::before and ::after pseudo-elements on <input type="checkbox/radio"> is allowed, according to the current standards.

To better explain HTML void elements, we should point out first what tags are. When it comes to the HTML anatomy, first of all, tags are not elements, as this is a pretty common misunderstanding. The tags are meant to delimit the start and end of elements in the markup.

The HTML void elements don’t have a proper end tag, therefore they can’t have any kind of content between the start tag and the end tag. 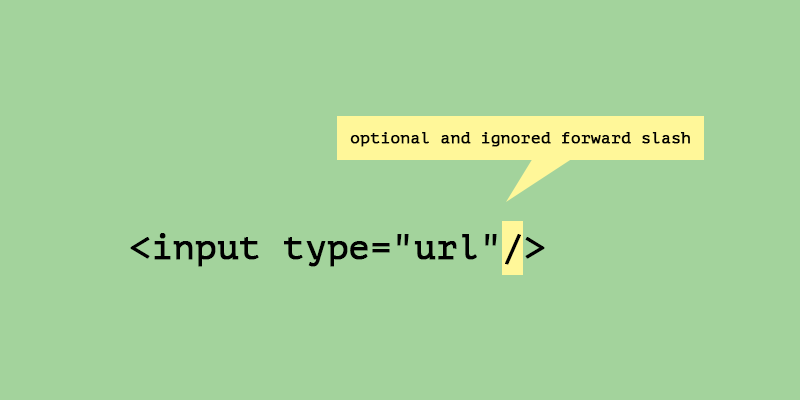 Void elements only have a start tag e.g. <input type="url">.

Here’s the list of void elements, according to WHATWG:

It often happens to see void elements in the wild with a closing forward slash like <br/> or even with an extra space e.g. <br />, which is specific to the XHTML syntax. For better compatibility with XHTML, the slash is allowed on void elements by the HTML specification, therefore the document passes the markup validation.

As a side note, depending on the type of the HTML element here’s what the forward slash does on <foo/>:

Here’s what I noticed, after lurking through W3C, WHATWG and MDN docs, old issues and forgotten corners of the web:

When in doubt over one or the other, either it’s a replaced or a void element, I hope the above Venn diagram will come in handy.

Oh, and always validate your markup, it does miracles for your body!